“Look,” Miller says. We’re sitting at his desktop computer. He logs into the server and pulls up Google. What he typed in next changed my life.

The screen was suddenly full of butts. Rotund, marble buttocks of Grecian statues. Pale plumber’s cracks peeping out from the tops of jeans. Butts in bathing suits. Butts in khaki pants.

And a lingering image of a politician. Not a naked one. Just a headshot.

Miller looked at my hanging mouth. “Isn’t that crazy?”

Miller was my friend who lived down the street. At nine, he was already like 5’10”, skate-boarded, and had had a “girlfriend.” We were in Boy Scouts together and had the same group of friends. He was too loud and too crass for me—nine-year-old Danny was a total prude—but he had video games, and I loved being Princess Peach in Mario Kart (? Maybe? I don’t know. Some game like that), and this was just the next level in our friendship.

After looking through the images of naked butts, I had to go home, probably for dinner or to color or do math homework or something.

In the next few days, my curiosity about this new, sparkling world grew. So one day after school, when no one was home, I sat down on the cracked-leather green cushion of the rolling desk chair and steered myself in front of our massive desktop computer in the TV room.

I pulled up Google and stared at the blank white space in front of me, with the pulsing black bar at the beginning of the empty search engine. Finally, I gathered up the courage to type out three simple, life-altering words. 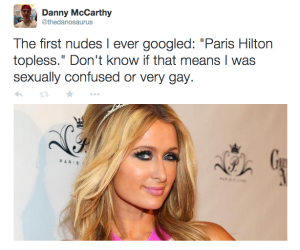 I don’t really know why Paris was the first person that came to my mind. This was 2004, which is what I like to think of as probably the peak of Paris Hilton’s relevancy. Over ten years later, I know more about her aunt Kyle Richards—of RHOBH fame—than I do about her. Although I know that her dog Tinkerbell just died. So RIP to Tink, I suppose.

But it was Paris whose name and boobies I witnessed on that fateful afternoon. It would be years before I watched her sex tape(s), so for the moment it was just a handful of pictures of Paris topless at a pool and the very scandalous pictures of her topless and kissing another girl.

At nine, seeing anyone’s naked body was revolutionary, so don’t worry if you think this means that I’m secretly straight and playing gay for the attention. That’s not why I’m playing gay. I’m doing it for the book deals. And the boys’ booties.

I did several different variations to look up nudes. “Paris Hilton topless.” “Paris Hilton boobs.” “Nicole Richie boobs.” I had little-to-no pop culture knowledge—an embarrassing secret that I have more than made up for in the years since—so I only really knew of Paris and Nicole from their show “The Simple Life.”

Side bar: that’s a great show.

This went on for two days.

My parents went out to dinner, and my sister Margot came into my room, where I was cutting out paper dolls and coloring in their skirts. I am only slightly embarrassed of this.

“Why were you looking at naked pictures on the computer?” Margot inquired. I jolted, and looked into her hazelly-green eyes, which were searing back into mine from behind—frankly—unflattering glasses.

I briefly contemplated playing it cool before cracking. “How do you know that?”

“It’s on the search history,” Margot rolled her eyes, overcome with disgust at my ignorance. A decade later, not much has changed.

“What is the search history?”

Margot dragged me down to the TV room and clicked open a tab on the computer. In that tab was the evidence of my softcore Internet meanderings. “It all stays on the computer?” I whimpered.

The Internet had betrayed me. Up until this point, the Internet had been my friend. It had allowed me to play car chase games and visit Club Penguin. Now it was the humming reminder that I was—in my mind—a grade A pervert.

“How do I get rid of it?” I asked frantically.

“I know how to do it,” Margot answered. At twelve years old, she was full of superior computer skills.

Margot considered this for a second. I waited.

“Give me your sour Skittles,” she said finally.

One bag of sour Skittles later, Margot was erasing the evidence of my curiosity from the computer.

Margot held our shared secret over my head for the next few years. She blackmailed me into giving her the remote, the better seat in the car. Until I got my own computer and discovered how to mass delete Google searches, I remained firmly under her pink-glitter Claire’s Boutique thumb.

Miller and I drifted apart, as he went—presumably—into hard drugs and I dealt with being gay. Margot remained kind of a bitch. And I kept Paris Hilton close to my heart.

Side bar: I really want those fucking sour Skittles back.