I’ve been feeling hypersensitive about my body, so I went on a run.

Back up a few years to understand why this is a big deal. I hate running. I ran essentially year-round for four years straight—cross country, indoor track & field, outdoor track & field, summer runs—in high school. By the end of senior year, running was gag-inducing. I exchanged it for other modes of cardio in college, and slowly lost the tolerance for longer runs I had built up—through literally blood, sweat and tears—throughout high school. 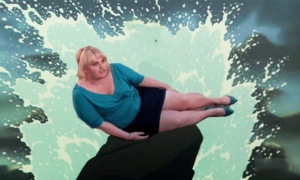 This photo has no relevance to the post. I just hope it becomes the thumbnail.

So yeah, I guess long story short, I hate running. But there is nothing to make me feel simultaneously better and worse than running. Better because running triggers my already overactive sweat glands like nobody’s business, tricking me into thinking I’m burning a shit ton of calories. And since my body image issues are mainly in my tricky head, tricking is more benevolent than malevolent. Worse because running fucking sucks. My chest cramps up and I swear I start coughing up blood.

I went to the gym this morning—I’m writing this on Saturday—but I vegged the rest of the day, so I decided to go on a run before dinner. I’ve been feeling pasty and doughy and wholly unattractive these past few days. Partially it’s because I’m sick and that always throws me through a loop. Plus, my skin has been erupting like the Hindenburg.

But mostly it’s because I have to get shirtless in front of a bunch of muscled, athletic, tanned Abercrombie & Fitch wannabes at work.

And for someone who’s more in the American Apparel aesthetic—just visually, I can’t actually shop there unless I take the five-finger discount (stealing)—Abercrombie & Fitch wannabes make me as uncomfortable as an actual Abercrombie & Fitch store. Why do they have to be so loud? And so dark? And does that cologne they spray everywhere have some sort of horse tranquilizer in it?

I got lost in that tangent and I’m slightly confused. But that might just be the horse tranquilizers.

I slip my earbuds up through the neck of my shirt, popping them into my ears. My phone is wedged in between the consecutive waistlines of my gym shorts and my boxers. Later, the phone will be wedged between my bare hip and the waistlines because the previous position caused a little too much slippage for the owner of the phone to be comfortable with.

I turn right out of my street, forgoing the hill straight ahead and following along the squat suburban streets, dipping down the hills, up by the library, down by the church.

I’m playing Spotify and trying to stretch my clomping gait into something more graceful. Flipping through my head like a Rolodex or a pinball machine are thoughts of how much I would like to be sitting down, thoughts of my burning esophagus, and thoughts of inadequacy.

This might come as a shocker, but feeling unconfident about your body is not fun. Truly, I’m working wonders here. I’m Mother Theresa, with a better haircut and a desperate need for an attitude adjustment.

There’s an antiquated phrase—and by “antiquated,” I mean 2006—“in need of an attitude adjustment.” I feel like that’s the kind of thing my mom would say about me when I was acting super bitchy and listening to Green Day—I was 11, give me a break. And the collection of words makes me conjure up images of crowbars, men in helmets and fluorescent orange breaker vests descending to the subterranean, ironclad depths of my psyche, finding my “attitude” and clobbering it with crowbars, cranking the cogs this way and that way, repainting the hull and hammering out any dents.

I wish changing your thought process was as tactile as fixing, like, I don’t know, a shelf? I’m not good at DIY, so I really don’t know what to say for this. Whatever, you get my point.

Changing your negative thought processes should be easier because…because it just should be. Like, I wish that I had the confidence and poise of a young Diane Keaton—I have no fucking clue where that came from, but she is CON. FI. DENT. So I guess I’ll stick with that?—but I don’t. And I wish I could say that I’m secure in my body and my heart and my mind and my soul, but I can’t. And that’s really frustrating. I’m a fixer. I aggressively and unwarrantedly take control of situations. I would rather do group projects by myself to have all the parts under my grip.

But we can’t control our minds. We can work at diverting downward spirals, but that’s hard. I want it to be easy. I want to flip a switch and be confident. I want to be Diane Keaton, rocking menswear and gray hair. 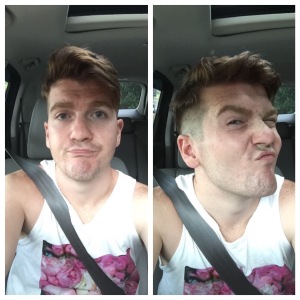 Anyway, after the run—which was preceded by an impromptu, impulse haircut—I felt better-ish. But I hate that these material things—getting a haircut, going on a run, sacrifing a virgin and bathing in her blood—made me feel good about myself in a way that I wasn’t able to. Like, even though on the surface they don’t sound like bad ways to cheer yourself up, I want to be able to break myself out of the cycle of negging on my appearance.

I wish this was one of those blog posts where at the end I’m like, “And that’s how I discovered the secret to success, self-love, and body-positivity!” But it’s not because I really don’t have any answers.

Sometimes we’re all just Kathryn Hahns living in a world of Kate Hudsons—How to Lose a Guy In 10 Days, duh—but Kathryn Hahn ends up with that guy at the end, so we should all hope to be so lucky. Until then, just help your prettier, blonder friend try to ditch the perfect man for the sake of writing a good article.