On last night’s episode of RuPaul’s Best Friend Race, I decided that my cuticles are really looking good. And that’s a shaaady way of saying that it was a bit of a let-down. There were the big moments—Derrick attempting to come for Bob, and Bob just looking at her like a bear looks at a fly—and there were the small ones—Kim Chi serving Pearl realness with “Is there something on my face?” which is one of the only lines in the history of television that makes me curl up inside myself. But largely, it was just consumed by the Snatch Game.

Question: Do you think Derrick is legally obligated to make at least one Britney Spears pun per episode? Or are they just holding the other members of her throuple hostage?

Derrick tried to drag Bob—“Can you teach me how to do rachet drag?”—playing off the fact that Michelle Visage gave an unfounded critique of Bob, saying that “ratchet drag” is her thing even though she brings it to us every ball.

Then RuPaul stalked around the Werk Room, trying to throw the queens off balance. I really wish that there was a Snatch Game where every queen did her first, terrible Option A, instead of “scrambling”—using air quotes—for their Option B’s.

In a ShOCKing turn of events, Naomi and Bob were going to both do Whoopi Goldberg—what did Whoopi, or us, ever do to deserve that—and Naomi switches to Tiffany “New York” Pollard, and Bob somehow switches to Uzo Aduba, rendering Naomi’s switch completely moot.

A last-minute switch isn’t always shooting the horse in the knee; last season saw Miss Fame and Violet Chachki both poised to do Donatella Versace. Violet decided to do Alyssa Edwards—queen of the no-chin tongue-pop—and managed to slay. Fame’s Donatella fell completely flat, and she went home soon afterward.

Bob’s characterizations—Crazy Eyes and Carol Channing—are really spot-on, but two things have to be said. First is the professional critique: Bob’s switching between two characters is excellent for throwing off the other contestants, but makes her seem too hungry. The judges warned her against “showboating.” The other is a personal critique: Bob didn’t do “Uzo Aduba;” he did “Uzo Aduba” as Crazy Eyes. It’s a small distinction, but the point of Snatch Game is to mimic and parody someone who is intriguing and interesting and maybe unexpected—playing an outlandish character isn’t really that hard to do, even though Bob does it well.

Derrick Barry—a professional Britney Spears impersonator in Las Vegas—decided to go outside the box and do Laura Bell Bundy. Derrick, Laura Bell Bun-don’t, please. RuPaul and the producers kept you for Snatch Game, to let everyone release those Britney blue balls they’ve had since you were announced on the cast.

On Snatch Game, here’s the rundown.

For the runway, it’s Night of 100 Madonnas, which ended up being Night of Five Madonnas, because four out of eight queens wore the same kimono, forcing me to make the awful pun, “KimOHNO.”

Acid talks about how no one likes her. Thorgy talks about how she wants to conduct an orchestra in drag—The Thorchestra—but frankly, I don’t know why she didn’t call it the New York Philharmondick. Also, this has to be said: Thorgy’s dreads in his hairnet look like a big ole bag of Cuties clementines. 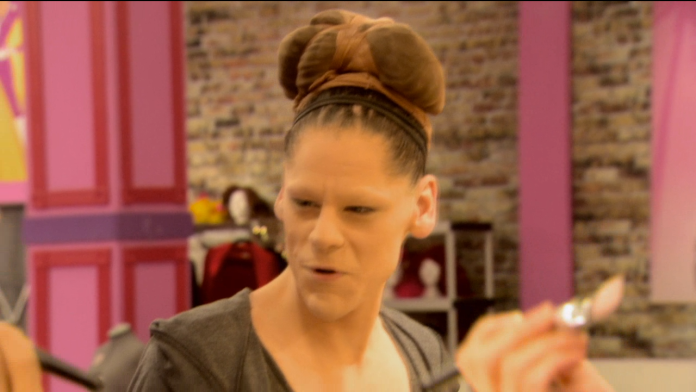 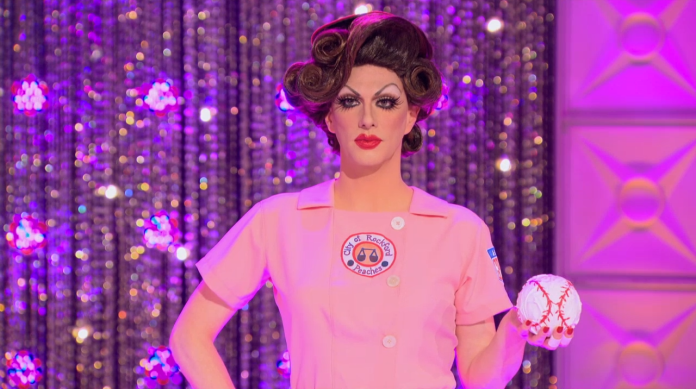 Michelle Visage—a former Madonna impersonator—loves tearing into the queens, and the pure look of terror on Derrick’s face when Michelle’s shark eyes land on her almost makes up for every boring moment in this season. 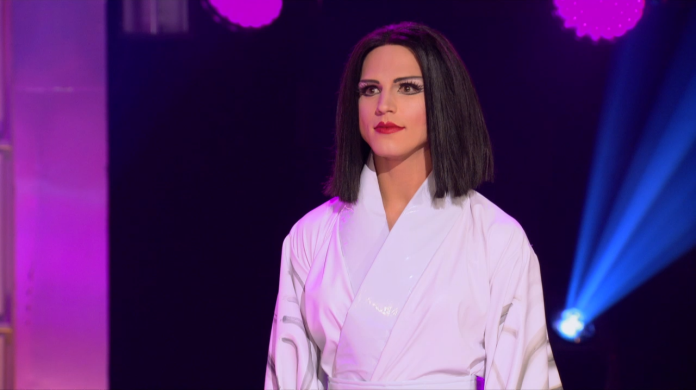 Source: LogoTV  THE LOOK OF SOMEONE WHO’S JUST SHIT ON THE RUNWAY

Kim Chi and Chi Chi DeVayne are the first ones safe, but no one got a chance to comment on Kimmy Jong-Un, and that makes me sad.

Bob wins the Snatch Game, even though—yet again—Thorgy gets praise heaped on her. Poor Susan Lucci. Bob walks away with another victory and Thorgy goes back to slowly dying a little bit on the inside with every passing day.

Robbie, Acid and Naomi are in the bottom three, and Robbie is declared safe. Then it’s the Lip Sync of Bitter Betty and Naomi Shambles. Betty gets a little shady when she kicks Naomi’s kimono off the stage, but maybe she was just trying to minimize the amount of kimono desecration that had already occurred onstage that night. In the end, Acid was sent home and my g0ddess Naomi Smalls stayed. 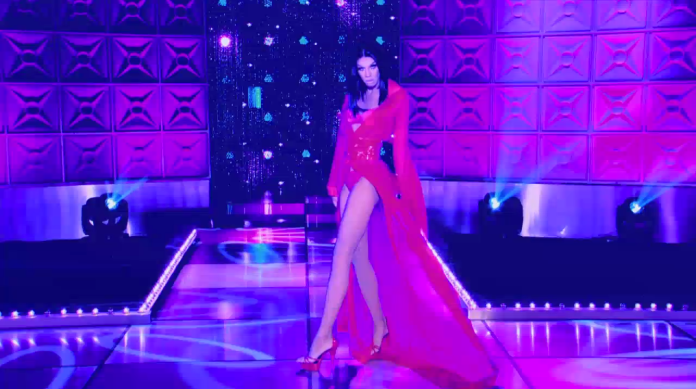 I think that the choice to have a veteran and visually aesthetic queen be eliminated was an interesting one. Naomi is younger, less experienced, and has shown less breadth, but I think the biggest thing is that she wants to be there. Acid kept shitting on everything, and even though I’ll miss seeing her reenact The Gremlins on the runway, I’m glad that Naomi got to stay.