Grade: B+ for questions answered but also questions left unanswered. Did I mention that until I was eight years old, I lived in a town called “Riverdale?” So maybe that’s why this episode of Riverdale struck so true with me. Because when my best friend, who’s just confessed her love for me, won’t answer my texts about a mysterious town murder, I also run shirtless to the house of the teacher I’m having an affair with. So spooky how similar I am to Archie!

The revelation that Jason Blossom’s death was due to him being shot in the face rather than drowning shakes the foundation of misty Riverdale. Seriously, there is some serious dust in the air in Riverdale High and I can’t help but worry for the kids with asthma. Are provisions being made for them? Archie is racked with guilt over the knowledge he possesses. He knows that whoever shot Jason did it early in the morning on the Fourth of July. But he can’t open up to anybody because he only knows this because he was entwined in the arms of music teacher Ms. Grundy. Let us remember that Archie—despite his oiled, muscled body and jawline that protrudes out of the screen—is supposedly a high school sophomore.

The “living mannequin” twins ask Cheryl during science class (Algebra? Chemistry? Physics?) the very question I was wondering myself: Is Cheryl lying? Cheryl told the police that Jason fell into the water to get the gossamer-cloth white glove she had dropped. Later we find out that Jason was shot.

But more comes out—with a proctologist’s snap of her rubber glove, Cheryl reveals that they both fell into the river. Cheryl made it to shore—alone. But can we believe her? Something seems off with this blossom.

The school organizes a pep rally to honor Jason because why not, and Betty uses Veronica’s “I’m sorry” mani-pedi with Cheryl as a mani-petty.

And more comes out of the falling-out between Jughead and Archie. They were meant to go on a road trip (do either of them possibly have licenses?) on the Fourth of July, but Archie canceled and the entire summer was weird after that. Later, Jughead witnesses Archie and Ms. Grundy canoodling BECAUSE THEY’RE NOT CAREFUL AT ALL and confronts Archie. It seems like Ms. Grundy might be this episode’s titular “touch of evil.” Archie, torn with guilt and also just shredded, wants to tell the truth about the Fourth of July. Ms. Grundy holds Archie in the palm of her hand and says no, claiming that she has feelings for him and this would ruin what they “have.” What they “have,” Ms. Grundy, is a jailable offense, you freak. Ms. Grundy is officially on my shit list. She’s emotionally manipulating Archie into not telling that creepy Principal Weatherbee about them because she doesn’t want to go to prison for child molestation.

While Cheryl straddles Petty Betty to do her makeup, she asks a lot of questions about Polly, Betty’s sister who went insane and now lives in a group home. Yikes. Yikes. Things escalate (not sexually) and Cheryl accuses Polly of killing Jason. But in that moment, there’s something cracked in Betty. Something raw. You can see it in her face as she rises up against Cheryl, and something dark blacks out her eyes.

New Theory: Polly, the unseen sister, is the secret half-sibling of Cheryl and Jason. Think about it—without reason, Mrs. Cooper is so against Polly and Jason. And there’s something incestuous about Cheryl and Jason—sipping out of the same milkshake, wearing coordinated outfits. Could it that sibling love runs deep in the river of relatives? Cheryl and Jason, and Jason and Polly?

In a fun little aside, we see Betty’s mom (Mom Cooper) bribing the coroner to get the straight truth-tea of Jason’s autopsy. “Marbling of the veins, signs of scavenger activity, ligature marks on both wrists, and a hint of cryo-necrotic preservation.” I don’t know what any of that means but I’m pretty sure that—plus the whole “bullet to the face” thing—means that Jason didn’t die of natural causes.

At the pep rally, which was always a horrible idea, Cheryl is overcome with memories of Jason. She sprints away and Veronica comforts her, Petty hovering just beyond the doorway.

“Jason, he was supposed to come back,” said Cheryl, sobbing in the locker room. Veronica mouths the words.

And suddenly, Cheryl’s anger at Betty makes more sense. “I think your crazy, tweaked-out sister killed him.” Was Jason going to meet Polly? Was Cheryl covering for him?

And did Jason actually meet Polly in the woods? Or was someone else waiting for him there? Someone with a motive to kill him, maybe someone whose sister was driven insane by a relationship with Jason? The answer, kind of surprisingly, is Cheryl. But also not that surprisingly because she was the last person to see him alive and she already fudged the details of what had happened. But her willingness to accept that she’s been arrested (but never came forward) proves that she believes herself to be responsible for Jason’s death. Whether she actually caused it, I don’t believe to be the case. But her twintuition means double the guilt.

OBSERVATIONS AND QUESTIONS FOR NEXT EPISODE: 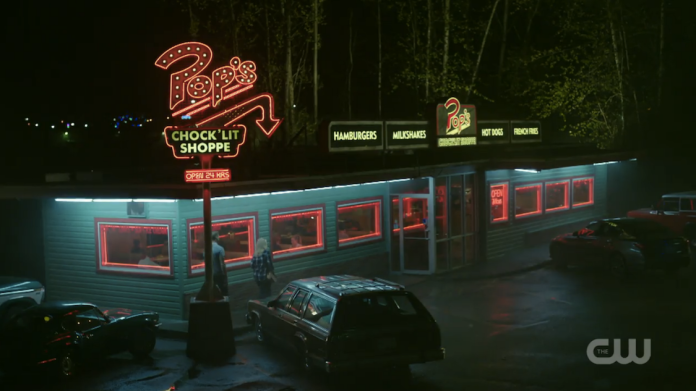