I’m young, and I love my computer, so I didn’t come across Joy Reid, an MSNBC host, from her show, A.M. Joy, or guest-hosting on other programs. I discovered her through Twitter, when I noticed that several writers and journalists whose opinions I respect retweeted her. I scrolled through the profile, enjoyed what she had to say, and hit the follow button.

She remained largely out of my mind except for the occasional tweet in my timeline. Her opinions were always valid, sharp when needed, and seemed to be well-researched and reported.

Then, the first story popped up – a Twitter user posted screenshots of blogs using homophobic rhetoric written between 2007 and 2009 on the Reid Report, a now-defunct blog of Joy Reid. I felt disappointed, like “Ugh, someone I liked did something bad.” But I didn’t unfollow her, because I still trusted her political opinion, and expected the story to blow over. There are plenty of journalists who I personally might be annoyed by, but whose reporting proves valuable, so I didn’t give it a second thought.

Until the next story popped up. More screenshots, more homophobia. More crassness.

When I say that this story does not matter, I do not mean, “It does not matter if someone is homophobic.” It does matter; and it matters very much to me. But in the context of everything else going on, I find that I care very little about what Joy Reid said about gay people a decade ago. She does not make policy; she is not in charge of any government programs or bodies. She is not promoting active anti-LGBTQ laws. If she were a lawmaker, or campaigning on a platform of equality, then yeah, it would be good information to know. But she is not. She is a journalist, she had an opinion, she said that opinion. A decade later, that opinion is seen as ugly and inappropriate.

For the record, I also don’t believe Reid’s claim that she was hacked. I think she said those things, and she’s embarrassed now, and because the internet trolls would have a field day if she admitted that. I am not defending her; she was and is an adult who wrote those things, regardless of whatever excuses she’s using now. I think it’s stupid that she’s lying, but I also think this entire thing is stupid.

I also recognize that I, as a white, cisgender, able-bodied queer person, largely have the ability to say, “This story does not matter.” I’m sure it matters to other members of my community, and I do not diminish that, their feelings, or their reactions.

But to lampoon Reid for thoughts she had a decade ago would require us to go back and lampoon every single thing like that. In the early 2000s, most people in the mainstream media were not doing a good job talking about queer issues. Because, frankly, Will & Grace was homophobic – it was femme-shaming and white-centric. Modern Family portrays Mitch and Cam more like platonic roommates than a couple. Golden Girls had a gay cook that mysteriously disappeared after the pilot episode. I will never forget you, Coco (his name was Coco!).

The reason I care about this (and why I’ve spent 700 words saying I don’t care) is that there are queer stories that desperately need to be told. And while I think it’s nice that support has rallied around Reid – no one should be an island – I resent that this still is the story that’s rolling around in everyone’s head. In a world that already prioritizes everything above queerness, there seems to be precious little bandwidth dedicated to covering queer stories. It’s like arguing about the curtains when the house is on fire.

For instance, it’s been a year since news broke that, in Chechnya, gay and bisexual men were being targeted, persecuted and abused. There were stories of concentration camps, luring and violence via social media apps, and many victims are still missing. There has been no significant response from the Russian government, and the leader in Chechnya, Ramzan Kadyrov, denied the allegations by simply stating that there are no gay people in Chechnya. Other than outlets that specifically traffic in queer stories, such as NewNowNext and the Advocate, and papers such as The Guardian, there has not been significant media coverage.

Stateside, there are still seven states with “No Promo Homo” laws on the books – “local or state education laws” that expressly prohibit the “promotion of homosexuality” and, in some cases, “even require that teachers actively portray LGB people in a negative or inaccurate way,” according to GLSEN.

The Human Rights Campaign reported that, in 2018, eight transgender people have already been murdered. Transgender people, particularly transgender women of color, are disproportionately affected by fatal violence. Insider recently reported on the health gaps that the LGBTQ community faces in receiving medical help.

These might seem like separate issues, and you could argue (rightfully) that reporting on Joy Reid’s past blog posts does not mean that we cannot also report on other things affecting the LGBTQ community. And you’d be right, except that that’s not always the case. Too often, we focus on click-driven news, too often we focus on things on little consequence.

What do Joy Reid’s past writings have to do with the very real risks that the queer community is facing today? In reality, very, very little. So why does this continue to be a story? Report on it, lay it all out there, and then move on. 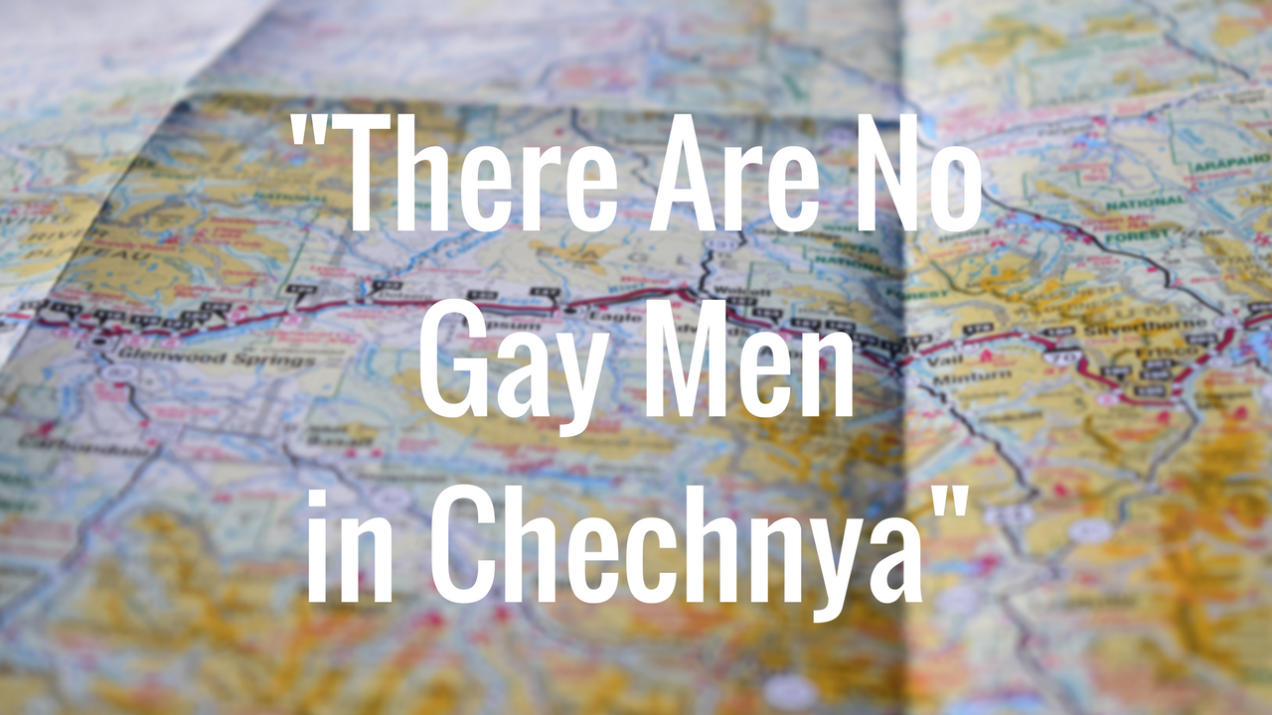 My previous blog about Chechnya

In an interview with HBO’s Real Sports reporter David Scott, Ramzan Kadyrov, the leader of the Chechen Republic, denied recent allegations that Chechen police have been rounding up, detaining and torturing gay men. “This is nonsense,” he said, “We don’t have those kinds of people here.”

When responding to Scott’s questions about the stories surfacing from gay men who allege they were tortured, Kadyrov said, “They are devils. They are for sale. They are not people.”

END_OF_DOCUMENT_TOKEN_TO_BE_REPLACED

On Tuesday, April 11, Press Secretary Sean Spicer mistakenly claimed that, in response to the chemical attack in Syria, not even Adolf Hitler used chemical weapons against people during the Holocaust.

The point was to drive home the notion that Syrian president Bashar al-Assad, who was suggested as to have ordered the attack, was monstrous for using chemical weapons. Spicer was given the chance to recant and clarify his statements, which he did sloppily and called concentration camps “Holocaust centers.” His statement is false: gas chambers were used to kill Jews (the exact number of dead is estimated in the six millions). In the following minutes, hours and days, Spicer’s malapropism was dissected endlessly. He has since apologized.

In 1980 CNN, the first 24-hour news station, superseded previous models of “nightly news.” With the advent of a continuous news cycle came the need to not only fill the empty hours between breaking stories and crises, but also compete with other cable news outlets. The negative space between reporting led to expert analysis, panelist commentary and soft-news pieces. That model, the culture of commentary, has become so prevalent in the Internet age that continuous news access leads to focus and dissection of the same incident, over and over again. That excessiveness is to the detriment of coverage in other areas.

And while this has been going on, major media outlets do not cover news out of Russia, that more than 100 allegedly gay men have disappeared in Chechnya and according to a Russian newspaper, local authorities are behind it. At least three men have been killed, according to the paper, which released the story on the fourth of April.

And since then, at the time of research, the New York Times has written one article about the kidnappings. The Washington Post has written two. The Wall Street Journal, the Los Angeles Times and Fox News have not covered it at all. But in the days since Spicer’s mistake, there has been a flurry of activity and articles. Four from the New York Times, 14 from the Washington Post (just on the first search page), four from the Wall Street Journal, one from Fox News and four from the Los Angeles Times. This does not include the hours of screentime dedicated to covering Spicer. All articles took a similar approach to describing the event, and later articles reframed the incident with various angles.

And while major news stations have focused on the salacious scandal of Spicer, smaller outlets like BuzzFeed, TheSkimm, and Teen Vogue, as well as international media like the BBC and The Independent have covered the disappearances.

The independent Russian newspaper, Novaya Gazeta covered the incidents in Chechnya (in Russia, most media is either associated with or owned by the Kremlin, the central power authority). According to the paper, at least 100 men have disappeared over the last few weeks. When some return, they are badly beaten. Three have died from their injuries. According to Novaya Gazeta, the men are arrested by local authorities who then look through their phones for condemning evidence. These “honor killings” have apparently been under the authority of Chechen provincial leader, Ramzan Kadyrov.

Through spokesman Alvi Karimov, Kadyrov denied the allegations, saying, “You cannot arrest or repress people who just don’t exist in the republic. If such people existed in Chechnya, law enforcement would not have to worry about them since their own relatives would have sent them to where they could never return.” The Chechen Republic is a conservative Muslim society, where homosexuality is taboo.

Humanitarian groups, like the Human Rights Watch and the Human Rights Campaign have called for Russian authorities to recognize these attacks and for Secretary of State Rex Tillerson to discuss the kidnappings while in Russia.

It’s highly possible that the reason no new articles have been written about these kidnappings is because there is no new information. However, the fact that, in an age of unprecedented access and information, there can be fourteen articles about a linguistic misstep but one article about the potential systematic killing of queer people is startling. And not just startling, but dangerous.

The 24-hour news cycle breeds an environment of rapid competition. News stations want to keep the attention of their audiences, and to do that, they narrow in on the daily foibles of the Trump administration. They host panels to discuss what Trump meant by his wiretapping claims, Spicer’s comments about the Holocaust, or Kellyanne Conway’s infamous “alternative facts.”

In a video discussing political satire, Vox’s Carlos Maza said of the wiretapping claims, “[Major news networks] correctly reported that Trump’s claims were false but then went on to spend segment after segment after segment hosting debates about it…They spent hours fixating on whether there might be evidence at some point down the road maybe that shows Trump wasn’t just making it up.”

The problem, Maza asserts, isn’t that the news stations are inaccurate, but they take “bullshit way too seriously.” These debates serve no purpose but to fill air time, and actually, according to studies, hurt the audience’s ability to identify falsehoods. In other words, saying the same “bullshit” enough times confuses consumers into believing it’s viable.

Maza’s solution is to cover the news the way political satirists like Samantha Bee, Trevor Noah and Seth Meyers do—recognize the bullshit for what it is, and move on to cover actual news. Because while major news outlets spend hours going over the same small blunders, real news slips through the cracks.