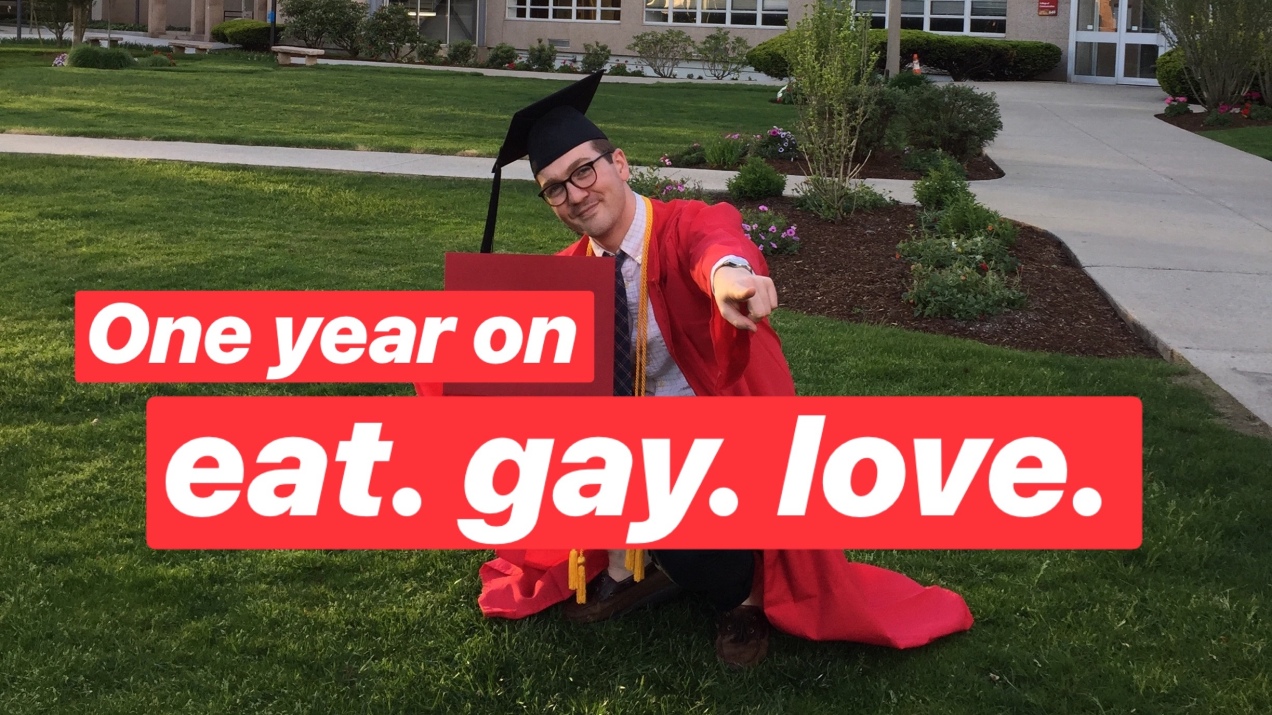 It’s officially been one year since I graduated from college, and I weirdly felt fine about it. It probably has a lot to do with the fact that I was working that day – nothing distracts you like an endless array of customers screaming about groceries – but it also could probably be attributed to the fact that I spent literal months stressing and freaking out about the fact that I was graduated that I think I exhausted it out of my body.

But the official end of the first year, even without the heart palpitations, made me take stock of what I’ve accomplished since then. Lol! !!

Part of the unspoken (but passive-aggressive) rule of moving back home was that I was going to responsible for cooking dinner. This wouldn’t be a problem (I’d been cooking for myself for over two years !) except for the fact that my family is both rude and not shy about criticizing my cooking.

So I really tried to be better about cooking (i.e. not burning things and calling it “intentional” or “crispy”), and I’m excited to bring that with me in my next iteration: as a gay monster and University of Southern California Annenberg graduate student. My mom keeps saying, “Your roommate will be so impressed!” which for some reason, like, does not inspire confidence. “My mom thinks I’m a good cook!!” doesn’t roll off the mature tongue.

Before this year, I don’t think I knew what “dredging” was, and now it’s literally my favorite thing to do to chicken and white fish. Also, I never cooked white fish before!! Now I love a good sole!! A year ago, I was microwaving potatoes, and now I’m literally so obsessed with finding the perfect method for making sweet potato fries that I’m going to write a blog post about it.

The second, and skinniest, thing I accomplished is mah body. I feel weird talking about my body for like 8000 reasons, but one is that I’m thin. I’ve generally always been thin, and – thanks to future medicine and the plastic surgery I plan on getting – I’ll probably stay thin. But to combat depression and a freelance lifestyle, I recommitted myself to the gym and lost 20-ish pounds this year.

I knew going into this body journey that it could be a dangerous path: when I was at my most depressed, the gym was a salve that gradually became a crutch. I was obsessed with going, because when I was there I could zone out and forget everything else.

I think I went into this year of fitness a different way, and I set weight goals, yes, but I also set goals outside of weight loss. I’ve written about this before, but I became obsessed with doing unassisted pull-ups. Upper body strength was never a huge part of my workout-life; in high school, I was a long- and mid-distance runner, where the emphasis was put on stamina and pacing (shorter distances place a higher premium on upper body strength). So I never really thought about pull-ups, and kind of dreaded them.

But as I started working out more – and probably aided by losing a few pounds – I began feeling the unassisted pull-up coming into my grasp. Currently, I can do 4×4 unassisted pull-ups (with 12 lbs dumbbells clamped between my thighs) and 4×4 unassisted chin-ups. My new goal is to do 3×8 pull-ups (I’m currently able to do one set of eight, and can maybe do two sets on a good day).

Setting these goals that existed outside of any weight loss put the emphasis not on cutting calories or excessive cardio, but building up my strength. I began feeling like I was training to be some sort of gay, chic spy. I’ve leaned out more, and I can see the whisper of those 11 abs that lady yoga instructors have sometimes. Goals. Also I’d like to hit (however briefly) 169 pounds for the hilarious joke. It will not be funny to anybody but me.

Despite the fact that I’ve gone back – officially – on dating apps, this section is not about my quest for a man. I know that my future husband, wherever he is, is probably in his last year of medical school, and has to gather a net worth of a couple mill before we even meet. And I love that for me, and he loves that for me.

I’m talking about self love. I went back into therapy this year, after a tumultuous few months away from it. and while it has not been easy – it’s actively been very hard – and I don’t think I’m nearly there yet, I feel like the work I’ve done, and the realizations I’ve made, have been very positive and very important for me. A lot of therapy is recognizing patterns you’ve engaged in, how they relate to larger behaviors, and what those behaviors mean in the grand scheme of your psyche. It sounds kinda simple, but lol it is tiring y’all.

I’ll be honest, I’m sure I would feel very differently about this year being up if I didn’t have my next step planned out. I’m excited to go onto my next step, and I can breathe a little easier on this anniversary knowing that I’ve got at least one thing in the future planned.

It also matters very much to other people. It’s socially acceptable, in what I’ve witnessed, to have something coming down the pike. People like knowing that you’ve got some sort of plan that fits into what they think you should be doing.

I had a customer the other day lean over and say, eyes kind and completely unaware of how condescending her question was, “Do you know what you want to do with your life?” In her eyes, working at Trader Joe’s was not good enough; it had to be a transitional station and not a destination. So I can’t pretend that part of my chillness about being a year out from graduation is the fact that my plan lines up with societal expectations on me.

This took a turn, but it’s all connected in my mind. This year out of school has been emotionally trying; facing professional uncertainty, rejection and trials have really made me think about what I want to pursue. And while I’m currently so excited and happy about where I’m going, it’s important for me to acknowledge that this year was not just about passing time or waiting for the next thing to come along. This year, in its entirety, was meant for me – it was meant for me to grow and to challenge myself and to experience new, sometimes uncomfortable, things.

I’ve included this because it’s a bop and it’s what i’m listening to as i’m editing this.