From top-to-bottom, this episode felt very…messy. It wasn’t bad, (thus the B-grade) but it wasn’t stunning—it was just messy. The drama felt forced and messy, as opposed to last week’s Eureka vs. Trinity or Aja vs. Valentina. This episode was classicly RPDR-produced, where at the top of the episode, you set up someone’s desire to win a challenge and someone hating on someone else, all to the sound of the Rococo rattleshade before the intro.

The queen wanting to win is Alexis Michelle, who immediately wins the mini-challenge—a selfie-stick photoshoot with the Pit Crew (Where is Bryce?)—and gets to give out parts in this week’s maxi-challenge: Kardashian, The Musical.

The queen hating on someone else is Nina Bo’nina Brown who is given the role of Khloe Kardashian by Alexis. Nina wanted Blac Chyna—the role of which was given to Shea—and calls sabotage. Sabotage? Khloe is literally the meatiest—no pun intended—of all the Kardashian sisters. If Nina were smart, she would’ve recognized that. But no, she wanted Chyna and proceeded to throw a low-grade hissy fit for the next forty minutes. 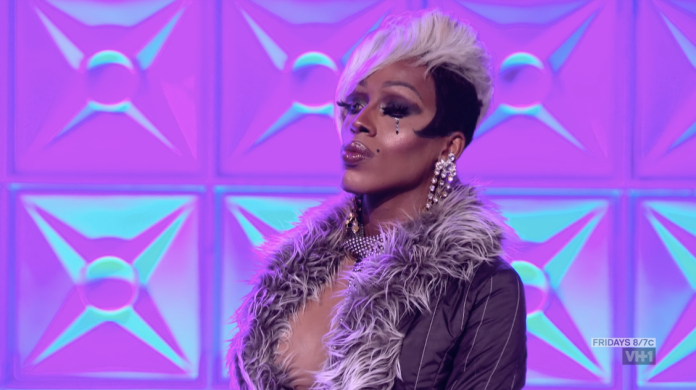 Part of the reason this episode was so boring is because the Kardashians are boring. They’re interesting enough for you to watch the real-life versions, but that charm does not translate to imitation. So even though some of the queens—Alexis, Shea, the celeb trio of Peppermint, Sasha and Trinity—did really well, even their “really well” was pretty boring.

Alexis shines as Kris Jenner, right down to the ugly mule wedge-heel. Trinity made me laugh as Paris Hilton, because she’s perfectly heroin-chic-thin and that fugly blonde wig was so Paris mid-2000s. Sasha was cute, but relatively unmemorable as Lindsay Lohan, but still definitely one of the better ones. And Peppermint was really great as Britney, even though her nude bodysuit was giving me horror-flashbacks to the Nude Illusion challenge on Season 7.

Shea was fantastic as Blac Chyna. Her part was arguably the smallest—time-wise—but it remained the center of the entire performance. Her look was right—even though she’s long and lean and leonine, unlike Chyna who is very short and curvy—down to the cheek piercings. But what really made her pop were her dance moves. I literally had no idea she was that good. Shea is so talented I’m gonna die, I love her.

Farrah and Valentina were as boring and lifeless as Kylie and Kendall as…well, I guess, Kendall and Kylie. Farrah was serving solidly 2015-Kylie, dark lip and turquoise wig, and V was just serving herself. The difficult part of Kendall is that, as a model, she’s built to melt into the vision of whatever designer she’s walking for. That means that she herself isn’t too memorable. Kylie, on the other hand, is ultra-memorable and Farrah completely misses the mark.

Annoyingly, Nina Bo’nina Bummer was solidly fine as Khloe. On one hand, I was really taken with her in the beginning, but her negativity really made me root for her failure. I’m a dick. Whatever. 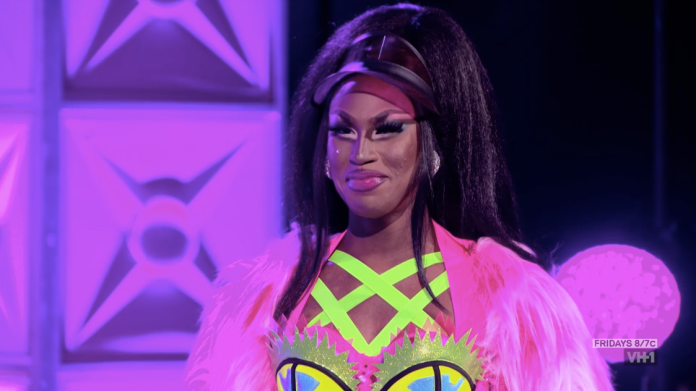 The runway—Faux Fur—was split pretty evenly between the Have and the Have-Nots of Style. Shea was serving a very bubbly monster-pink look, similar to her walk-in look; Valentina was curvy and resplendent in snakeskin and a fur stole; Sasha was giving us weird girl-boy Russian couture; Eureka was the Mother Monster to Shea’s look.

But as good as the Goods were, the Bads were even worse. Peppermint consistently misses the mark on fashion; Alexis was totally boring; Farrah served bright red hair with bright green fur. I think I would’ve liked Farrah’s more had it not been such a bright red hair—if it were blonde, it would’ve looked a lot less clownish.

Santy-Alley Fontaine and Farrah are in the bottom two for their lackluster Kim and Kylie, respectively. After a lip-sync to guest judge—eye roll—Meghan Trainer’s song, “Whatever, not gonna bother looking it up”, RuPaul seems poised to, in all honesty, send them both home when…out of nowhere…a PA comes to the bottom of the desk.

And for the first time in herstory, Ru Rucuses herself from the judge’s table. And when she returns, she calls out…a new name.

Yes, the Elephant Queen, who had been on crutches the entire episode from her knee-thing in Episode One, has a torn ACL and requires emergency surgery. My mouth was literally agape because Eureka was my absolute, besides Shea and Sasha and V, favorite queen on the season. She was dynamic and personable and beautiful and polished. And the fact that she had to go home without losing—without being in the bottom—and with no fault of her own, is heartbreaking. 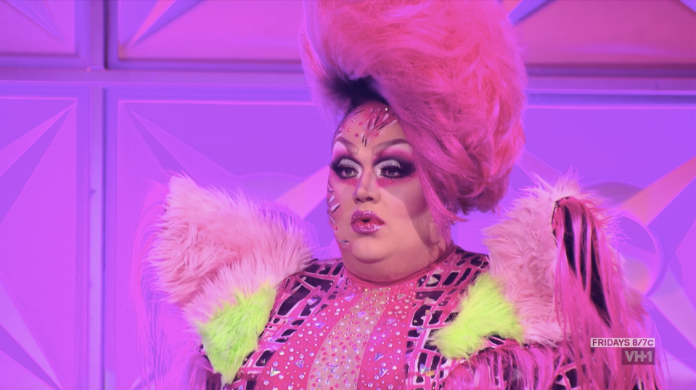 Ru extends an invitation to compete on Season 10, which Eureka will hopefully accept. And I just have one thing to say—I can’t believe we already know who will win Season 10! I’m not even joking, I believe in her that much.

Also, I finally understand her farewell phrase, “You Found It!” Because “eureka!” in Greek means, “I’ve found it!”